Big Brown Bats are one of Ohio's 13 bat species and can be found throughut Columbus, OH.

The Big Brown Bat (Eptesicus fuscus) is native to Ohio and can be found areas of Columbus. These bats are one of Ohio's most common along with the Big Brown Bat. They are often found roosting in caves, forests, and hollow trees. Although, it is more common for them to be found in man made structures such as attics, churches, apartment complexes, warehouses and other buildings of Columbus, OH. These bats are not an endangered or federally protected bat, although they are still just as beneficial to the environment as other bats and should be handled humanely.

The Big Brown Bat can live to be more than 20 years old, although the average lifespan is thought to be between 18-19 years. They sporadically mate between November and March. After mating season the females will form small maternal colonies mostly in man made structures which often times are attics of Ohio homes. The pups are born between the months of May to early June. Within the State of Ohio the Big Brown Bat will often give birth to 2 pups as where in the western part of the U.S. they only give birth to 1 pup. These bats are not migratory and may choose to use the same hibernacula for summer and winter as long as there are no bright lights and the temperature remains stable between 32 and 41 degrees Fahrenheit. This bat was also affected by the White Nose Syndrome of 2006 and 2007. Which was estimated to have killed millions of bats within the United States. Bat populations were estimated to have declined by 80% as a result of this devastating fungus.

These bats are medium sized bat with a weight of 1/2 - 5/8 oz, length of 4-5 inches and an average wing span of 11-13 inches. They have long dark brown glossy fur, with a black muzzle, ears and wings with a bare tail membrane. Their ears are short and blunt and have a broad snout and mouth.

The Big Brown Bat can be found in a variety of habitats ranging from timerbline pastures, but are found more abundantly in leafy forest areas. They tend to form colonies beneath loise bark and cavities of trees, but commonly roost in buidlings, barns, church steeples and bridges. Although, in urban habitiats they are often found colonizing in homes attics. Big Brown Bats are found virtually throughout the United States excpet for some areas of Florida and Texas and are a very common bat of Columbus.

These bats are insectivorous eating insects such as beetles, moths, wasps and other insects they can catch in flight. Many of the insects they feed on are harmful which makes them very beneficial to the environment.

Big Brown Bats can live upwards of 20yrs but have an average lifespan of 2-3 years. They mate sporadicly often time between November and March. The female will bear twins (occasionally one pup) during the months of May thru July. They will only have one litter annually. Once born they will weigh approx 3-4g. They will be able to fly between 21-28 days olds. 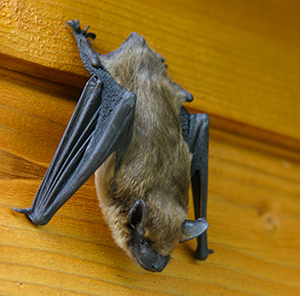