Hoary bats are one of Ohio's 13 bat species but are not as common in the Eastern U.S. as they are in western states. They are the most widespread bat in the United States and can be found in 50 states including Ohio. They are solitary bats and typically roost alone in trees, caves, or hiding in foliage. They may be seen flying in large groups during feeding.

Hoary bats average size is approximately 5 - 5.7 inches in length with an average wing span of 15.5 inches, weighing just under an ounce. They have beady eyes, small rounded noses, short rounded ears, dark brown gray fur with white tips that gives them a frosty appearance. They have a distinct yellow color to their throat. Juveniles may appear grayish in color but still have a frosty appearance.

It is thought that Hoary bats mate in August to early fall and store the sperm over winter. They will ovulate in early spring and give birth to 1 - 2 pups between May and July. Little is known about their gestation.

Hoary bats live in many different types of habitats including dense vegetation but are most abundant in forests and croplands. They can be found living in tree trunks, woodpecker holes, and in Spanish moss. They perfer to roost close to where they feed often time in decidious trees. Hoary bats are migratory that overwinter near coastal areas, and Gulf states. 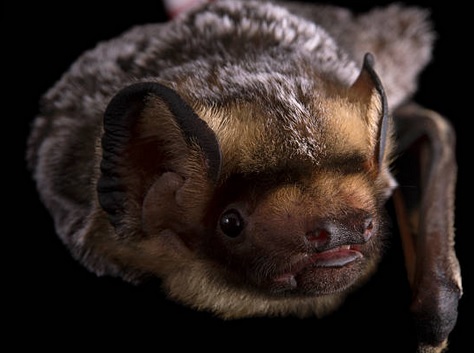