Mexican free-tailed bats are one of Ohio's 13 bat species and can be found throughut Columbus.

Mexican free-tailed bat is a rather plain looking bat, despite their drab appearance they are a rather intriguing bat. These bats can fly speeds up t 60 miles per hour, with altitudes over 10,000 feet. This is higher than any other bat and form colonies larger than any other bat.

This bat is dull in color ranging from dark brown to gray in color. It get its name from its tail, which is almost half their total length in size. Their ears are located closely behind their eyes, which are wide and set apart to help them with echolocation. They have elongated and narrow wing tips that helps them with quick flight. Mexian free-tailed bats are and average of 3 1/2 inches in lenth and weigh an average of 0.43 oz and have a wind spand of about 11 inches.

Breeding season for the female bat occurs during the last 5 weeks of spring. By summer the bats will divide into a maternity and a bachelor roost. Bachelor roost a relativey small compare to the maternity roost. Gestation period of the bat is between 11-12 weeks. Each female Mexican free-tailed bat typically with birth one young during the first to third week of June. The mother will nurse her pup until they are 4-7 weeks of age by this time they will be fully grown and weaned. Females bats become sexually mature much quicker than males. Females mature at 9 months where as males do not mature until about 2 years of age.

Mexican free-tailed bats can be found in Ohio, and most of the southern United States, Mexico, Central and South America. These warm-blooded animals perfer living in warm climates and form colonies larger than any other bat. Colonies have been discovered with a population upward of nearly 20 million bats. Typically, they will be found living in caves, tunnels, under bridges, in abandones mines, hollow trees, rock shelters and even in buildings. In Austin, Texas a colony migrates from Mexico in the summer to beneath the Congress Avenue Bridge, located blocks from the Texas State Capitol. The colony populatin is estimated at 1,500,000 bats which attracts 100,000 tourists each year. It is the official flying mammal of Texas. 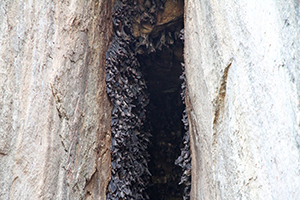